Search Continues on land and sea for Sailor Tomas Gimeno and Anna, age one after Olivia Gimeno’s body found at sea Tenerife Spain

Olivia Gimeno, six, and her sister Anna, one, were taken by their father Tomas without permission on 27 April 2021.

A body found inside a bag on the seabed off Tenerife has been confirmed as that of a missing six-year-old girl taken by her father weeks ago.

Investigators searching the water off the Port of Guimar found the bag tied to an anchor some 3,200ft (1,000m) below the surface, Spain‘s Civil Guard said on Friday.

Coroners later identified the body as Olivia Gimeno – whose father Tomas took her and her one-year-old sister Anna without permission on 27 April.

Their mother Beatriz Zimmermann, who is divorced from their father, claims he told her she would never see any of them again.

A second bag was also found empty in the water off Tenerife, sparking fears Anna’s body may never be found.

Police are still looking for the one-year-old and her father.

Investigators launched a widescale search after the girls disappeared, focusing on an area of sea off the Canary Islands when Mr Gimeno’s boat was found abandoned there.

Interpol joined the hunt by publishing photos of the two girls alongside so-called “yellow notices” aimed at finding missing persons.

Spanish Prime Minister Pedro Sanchez tweeted his condolences, saying: “I cannot imagine the pain of the mother of little Anna and Olivia.

“My hug, my love and that of my whole family, who today sympathises with Beatriz and her loved ones.”

Queen Letizia of Spain also expressed her “pain and sadness” before Olivia was found last week.

MADRID — Spain is in shock after investigators combing the seabed near the Canary Islands found the body of one of two young sisters taken by their father weeks earlier without the mother’s permission.

Coroners have confirmed that the body found in a bag and tied to an anchor at a depth of some 1,000 meters (3,200 feet) belonged to 6-year-old Olivia, the older of the two sisters.

Another similar bag that was empty was found nearby by a special oceanographic research vessel helping in the search, Spain‘s Civil Guard said, adding that the search for 1-year-old Anna and their father, Tomás Gimeno, is still ongoing.

“I cannot imagine the pain of the mother of little Anna and Olivia,” tweeted Spanish Prime Minister Pedro Sánchez. “My hug, my love and that of my whole family, who today sympathizes with Beatriz and her loved ones.”

Gimeno and the girls went missing on April 27 in Tenerife, the largest island in the archipelago off West Africa.

Their mother, who is divorced from the girls’ father, alleged he told her she would never see them again.

Investigators launched a wide search on land and sea but narrowed in on the waters off Tenerife after Gimeno’s boat was found empty and drifting at sea.

The girls’ mother had posted several videos of her daughters online in an effort to help find them.

Speaking at a women’s forum on Friday, Queen Letizia expressed “pain and sadness” for the deaths of Olivia and a 17-year-old woman killed by her partner in southern Spain earlier this week.

“I don’t think there is anyone this morning who is not trying to put themselves in the shoes of the people who love these murdered girls,” Letizia said.

Women’s rights organizations have called for protests later on Friday across Spain against the recent uptick of violence against women.

Men have killed at least 18 women so far this year in Spain, according to data from the Equality Ministry, which has recorded 1,096 deaths since 2003, when the country started keeping data on crimes of gender violence. Abusers often use children as means to inflict harm on their partners or ex-partners: since 2013, 39 minors have been murdered in the country by their biological fathers.

Casanas disappeared with the girls on 4/27/21, on a sailboat of unknown name, from Santa Cruz Marina, Tenerife, Spain. He is believed to be headed to a Caribbean island. If you have any information concerning this contact your nearest police authority or Coast Guard. Photographs of the father and two children are on the Boatwatch.org web site.

Experts believe that, in case of escape, Tomás opted for the Caribbean

If the hypothesis that Tomás fled by sea after transferring to a sailboat is taken for granted, the options that lead to America are the most likely, given the risk of being captured by the authorities if he went to the Peninsula; the African alternative, the worst valued 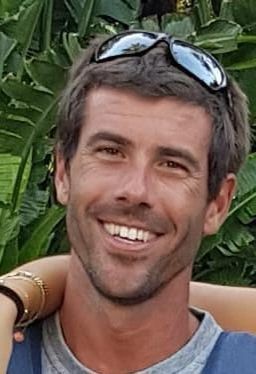 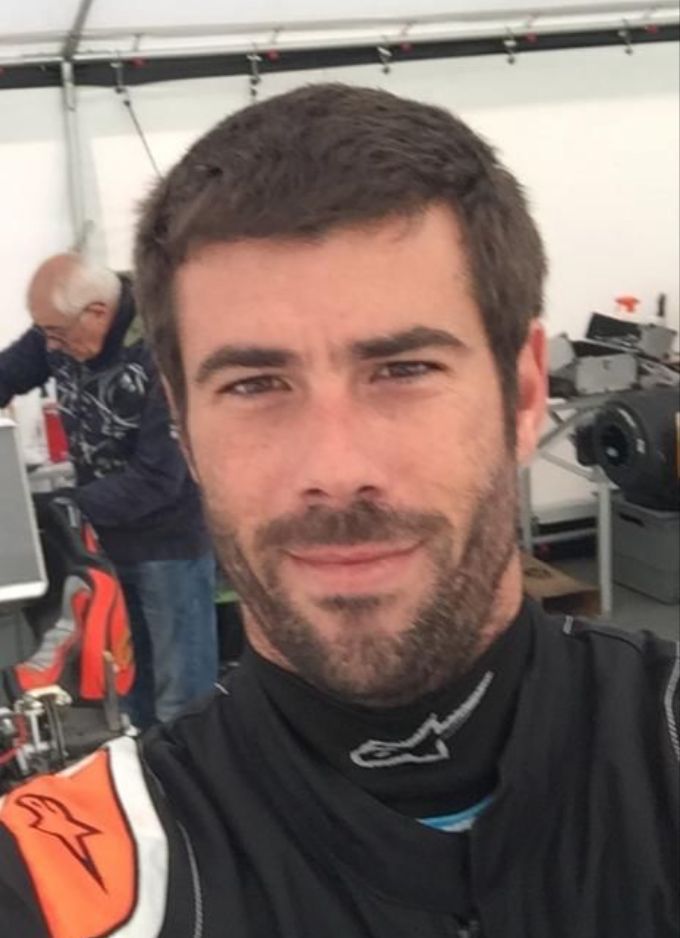 He wore Bermuda in a dark color, Black T-shirt 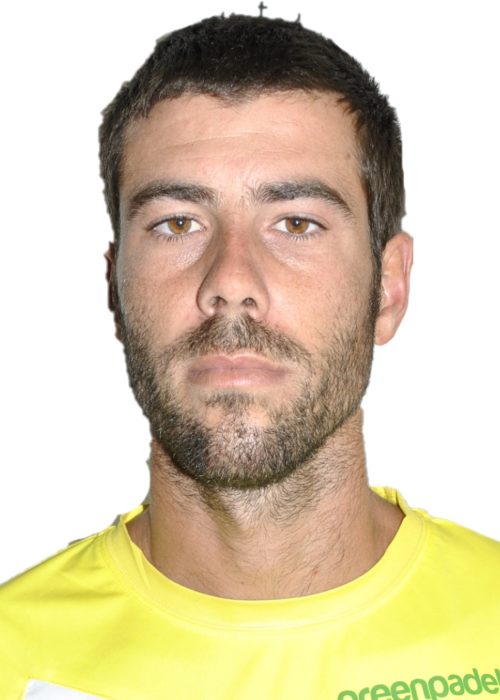 Help us locate it 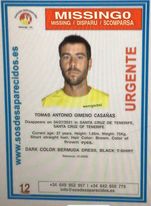 Bolo: Interpol has issued a look out poster dated 5/6/2021 to all ports in the Caribbean for Tomas Antonio Gimeno Casanas, 37 years old, for a possible case of kidnapping of two girls named Ana Zimmermann, one years old and Olive Zimmerman six years old.

Casanas disappeared with the girls on 4/27/21, on a sailboat of unknown name, from Santa Cruz Marina, Tenerife, Spain. He is believed to be headed to a Caribbean island. If you have any information concerning this contact your nearest police authority or Coast Guard. For more information contact Lawyer Jose Manuel Niederleytner at (0-34-636-4506840) (809-867-9766) or at info@sosdesaparecidos.es 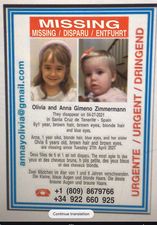 He left at night from the Santa Cruz Marina in a power boat that appeared the next day, adrift and empty, off the coast of Puertito de Güímar. It is believed that he then transferred to a sailboat.

Updated 7 May: It seems what people do when they feel the need to do something and can’t think of what else to do, and so there is a coordinated clapping throughout the Canaries at 8pm this Sunday evening in support of Beatriz Zimmerman, the mother of Olivia and Ana who disappeared with their father, Beatriz’ former partner Tomás Giméno, on 27 April. As with the care workers, people are asked to clap from their windows or balconies to allow their support to be publicly expressed for maximum effect, and anyone driving at the time is asked to blow their horn, as are those aboard boats, whether in harbour or at sea.

Updated 6 May: Interpol has joined the search for Olivia and Ana, and three boats currently crossing the Atlantic are being tracked. Meanwhile, police continue to keep an open mind while they consider various hypotheses including that the trio are still in Tenerife or perhaps La Gomera. The investigation remains sub judice but police ask the public to be aware at all times and phone them immediately if they see anything of interest relating to the case: the numbers specifically to call are 091 (Policía Nacional), 062 (Guardia Civil) or 112 (Emergency Services).

Updated 4 May: It’s a week now. The little girls’ mother, Beatriz Zimmerman, has issued a video and asked for it to be shared as widely as possible in an attempt to find Olivia and Ana her daughters of just 6 and 1 years of age who, she fears, might be in or on their way to a South American country where her former partner, the girls’ father, had contacts. Please do therefore spread this film about as much as you can. Meanwhile, police have confirmed that the blood found in the boat was of Tomás Giméno, not the girls, and they are taking it as a given now that he had assistance in carrying out what they’re describing as a prearranged plan. At least this all suggests those girls are still safe, a comfort of some sort while police keep an open mind as they clarify the facts.

Updated 1 May: Police, who have now searched the father’s dwelling and finca, say that they are considering a range of hypotheses, and that no theories are being discounted at present. As the investigation continues with the arrival of a specialist kidnap search unit and the Guardia Civil’s serious crimes squad (Unidad Central Operativa), a Güímar Court has now issued an international search warrant for the father, Tomás Giméno, who apparently withdrew some €70,000 from the bank before disappearing, and left with a fair amount of clothing.

His Audi was discovered at Santa Cruz harbour where his boat had been moored before it set sail for the third time to end up adrift in Güímar. That boat was found without its anchor, and it’s not hard to envisage a situation in which it was deliberately de-anchored in order to drift to lay a false trail; one possibility police are seemingly considering is that he took a second boat from off the Güímar coast. Anyone with any information on this man’s whereabouts should call the Guardia Civil on 062 or Emergency Services on 112; he is 37 years old, 1.85m tall (around 6ft), hair and eyes are brown.

Updated 30 April: The search continues today, intensified by the arrival from the mainland of a specialist police unit for searching for kidnap victims. The discovery, meanwhile, of a child’s car seat in the water near the father’s adrift vessel has been confirmed as that of one of the girls, and some blood discovered inside the craft is being analysed. An appalling investigation in which everyone is on edge, fearing the worst, praying that the girls are safe and that a false trail is being laid for police. If that is the case the specialist unit will probably be able to clarify it fairly quickly, but all hopes are now centred on finding these children alive and getting them back to their mother, and on finding nothing that leads to the conclusion that everyone fears, and no-one dares speak aloud.

Original post 29 April: A terrible situation is occurring in Tenerife right now as a mother waits for news of her two young daughters, children of just one and six years old, who have been taken by their father without permission. The awful series of events started on Tuesday when the father collected them at 5pm but failed to return them as required by 9pm. Police indicate that various people have received messages from the man, some saying he had said goodbye to them, and today the Guardia Civil have said that the mother herself had a call from her former partner to say that she would never see him or her daughters again.

Some of the messages sent led police to suspect that the man was taking his daughters to a boat he owns, and this was found last night adrift off the coast at Puertito de Güímar but without anyone on board. Camera footage subsequently shows that he set sail from its mooring in Santa Cruz after midnight Tuesday night, and a fingertip search of the vessel has been undertaken while a far wider search is ongoing with air, sea and land-based resources. Clearly many are fearing the worst but at the moment police are limiting themselves to describing the case as one of “potential parental kidnap”.

A large-scale search for two girls who are said to have been kidnapped by their father after police left a note of farewell to their mother is underway.

An extensive search operation is underway for one-year-old Anna and six-year-old Olivia after their mother reported them missing on April 27. The children were visiting their father, Tomás Gimeno, 37, who reportedly told his ex-partner in a telephone conversation that night that she would never see the kids again, but that he would take good care of them.