Watch the above video of the USCG rescue swimmers.

PAMLICO COUNTY, N.C. — The Coast Guard suspended its search Thursday afternoon for two mariners who were reported missing after the commercial fishing vessel Papa’s Girl capsized in the vicinity of the Pamlico Sound.

Watchstanders at the Fifth Coast Guard District command center were notified Tuesday night by a distress signal that was sent from the vessel’s emergency position indicating radio beacon.

At the beginning of the search effort, two of the four mariners onboard were rescued, and one was later pronounced dead at Albemarle Hospital.

Involved in the search were:

“The marine environment is a dangerous place to work because of the cold water, rough seas and high winds,” said Rear Adm. Keith Smith, commander of the Fifth Coast Guard District. “At this point, we’ve decided to suspend further search efforts for the two missing mariners, pending further information. Our thoughts are with the families and we are very grateful to the master of the vessel, whose EPIRB saved the life of the survivor

All vessels in the vicinity of Pamlico Sound, NC near position 35 31 N / 075 32 W are requested to keep a sharp lookout for to mariners in the water after their fishing vessel Papa’s Girl sank near that location Tuesday night, 07 JAN 2020.  An active USCG search is underway for the missing men as of 1500 hrs, 08 JAN 2020.  Anyone with information should contact the USCG RCC Norfolk at 757-398-6231. 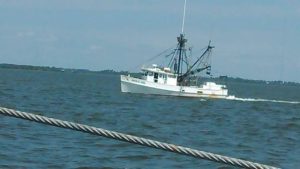 PAMLICO COUNTY, N.C. — The Coast Guard pulled two mariners from the water after their vessel sank on Tuesday night, and is currently searching for the other two crewmembers in Pamlico Sound, North Carolina, Wednesday morning.

Once on scene, the aircrew located two of the four crewmembers and transferred them to Sentara Albemarle Hospital in Elizabeth City for further medical care. Both mariners rescued were hypothermic and one required CPR, who was later pronounced dead by hospital personnel.

A first light search was conducted Wednesday morning by Coast Guard Air Station Elizabeth City aircrew members with negative results. A 47-foot Motor Lifeboat crew from Station Hatteras Inlet, along with the North Carolina Wildlife Resources Commission and a good Samaritan vessel by the name of Aubrey Niel, are continuing to search.

“This is a rough case and as we continue to search, our thoughts are with the families of the mariners,” said Matthew Brooks, search and rescue coordinator for the case. “We’re grateful for the EPIRB that was activated during the case, which enabled us to get resources on-scene as quickly as possible.

A properly registered EPIRB is a vital and highly-recommended piece of equipment for mariners to have on their vessels.”