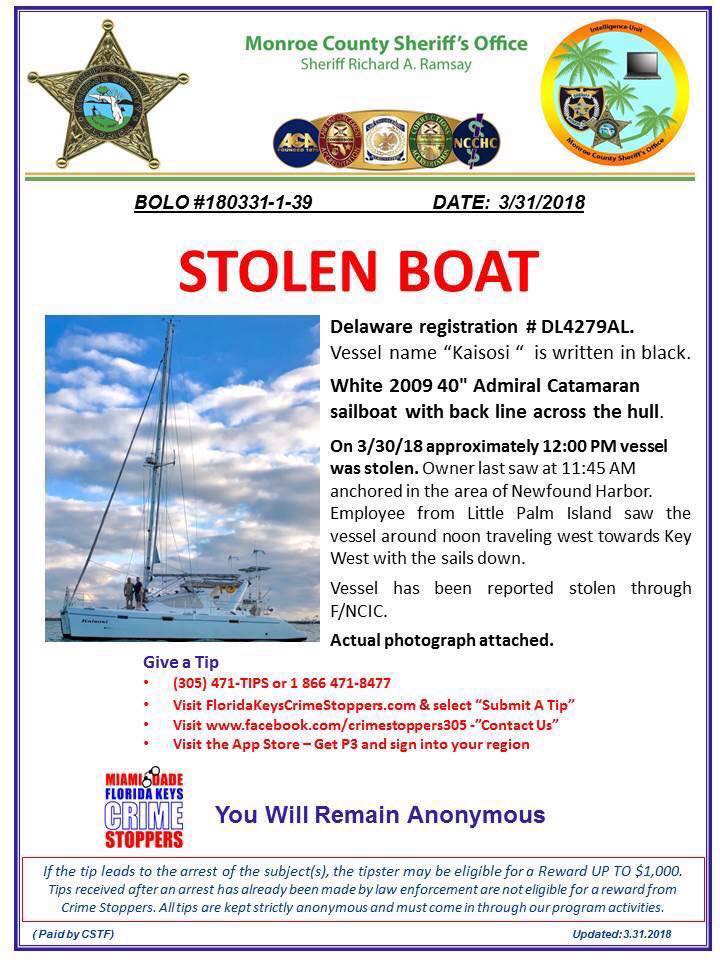 Seven Seas Cruising Association (SSCA)  HF Radio Service KPK is pleased to report the recovery of the catamaran SV KAISOSI which was stolen from an anchorage at Newfound Harbor in the Florida Keys at approximately 1200 hours on March 30, 2018.  The vessel was last seen traveling toward Key West with sails down.

A stolen vessel report was made to the Monroe County Sheriffs Office MCSO), the Florida Fish and Wildlife Law Enforcement Division (FWC) , and the United States Coast Guard (USCG) in Marathon, Florida.

SSCA HF Radio Service KPK was asked to assist in locating the vessel through radio nets and social media.  A BOLO was broadcast to all vessels throughout the Bahamas, Cuban waters, the Caribbean, and Mexico by both KPK and our sister HF station in Georgia, KJM.  Additionally, Coastal Station KNC in Dover, North Carolina made the BOLO announcement on both the morning single sideband (SSB) Cruiseheimers Net and afternoon Doo Dah Nets.

KPK contacted the victim of the stolen vessel to confirm the theft and gather additional information of value, as well as contacting the MCSO and USCG offering any assistance possible.  A summary of the theft along with a photograph supplied by the victim was posted on numerous Facebook Groups for cruisers, including the Caribbean Navigator Facebook Group moderated by Ken Goodings.

At 2124 hrs, 3/31/18 Ken Goodings notified KPK that a member of his Caribbean Navigator Facebook Group advised a vessel matching the description of the SV KAISOSI had tried to enter Marina Darsena Varadero located on the North coast of Cuba at Veradero, Matanzas.  The occupants of the vessel had no vessel papers or passports and were turned away.

At 2144 hrs, 3/31/18 KPK contacted SSCA Commodore and co author of the Waterway Guide to Cuba, Addison Chan, and notified the senior duty officer for Guarda Frontera at Gaviota, Cuba.  The USCG RCC Miami and MCSO was notified of the above information.  USCG RCC Miami contacted their Liaison Officer in Havana with the information.

At approximately 2230 hrs, 3/31/18 Addison Chan notified KPK the Guarda Frontera at Matanzas, Cuba had located and seized the vessel.  USCG and MCSO were notified.

The morning of 4/1/18, a vessel in Cuba participating in the Cruiseheimers SSB Net confirmed the seizure of the vessel and the arrest of two individuals by the Cuban Guarda Frontera at Matanzas.

The value of SSB Nets and social media cannot be overstated.

The Miami Herald reported this case in several articles. Here are 2: