Cruisers in Marina Horta have advised Captain Yann Guerin’s S/V Cap du Gard has exploded and caught on fire. He has been airlifted to a hospital in Lisbon suffering from severe burns. Please keep him in your prayers.

Good news from friends of Captain Yann Guerin. He has arrived safely in Horta aboard SV Cap du Gard after a 3,000 miles passage singlehanded presumedly non stop from Jamaica.

At this time Boatwatch is not asking Maritime Mobile Net to broadcast this non-emergency BOLO.

The news received from his friend Martin Smyth: The last news about him, he was in Kingston and all was OK with his boat, french embassy…. He was ready to go the May 15. The person who follow him in France, estimate he is somewhere between Bermudas islands and Azores. But currently, the winds are not with him. So, we are waiting for his news on or about June 15. That’s all I can tell you now.

Boatwatch has been asked to issue a NON-EMERGENCY Boat Watch for the SV Cap du Gard. The vessel is a fiberglass sloop, approximately 36′ in length, with a singlehanded French captain named YANN GUERIN.

He was last known to be at Panamarina, Panama, and may have set sail for Horta, Azores. However after 11 days at sea, he sailed into Kingston, Jamaica, very short on food, water, and a broken self steering rod. It is believed he had the steering rod repaired in Jamaica. He may have departed Jamaica on 15 May 2020, but this has not been confirmed.

Below are photographs of Captain YANN GUERIN and his vessel Cap du Gard: 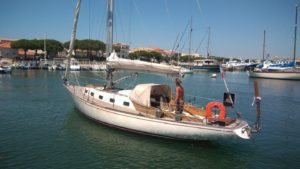 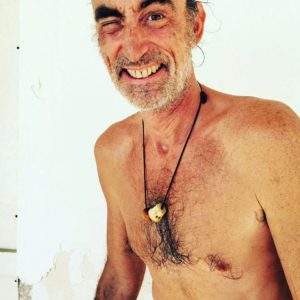