Cancel BOLO: SV GRAND FILOU HAS BEEN RECOVERED IN PUERTO RICO & ONE PERSON ARRESTED due to an observant cruiser reporting the boat to Boatwatch, USCG and Immigration and Customs Enforcement (ICE), San Juan.

The USCG and Immigration & Customs Enforcement (ICE) located the S/V GRAND FILOU at position 17 56.733 N / 066 07.841 W. The vessel was beached near the town of Guayama, Puerto Rico, and possibly taking on water. One Jamaican National was aboard the vessel and was taken into custody by ICE. It is not known whether other individuals were involved, or if the vessel contained contraband as the scene is still being processed.

Bravo Zulu to the USCG San Juan and ICE for the recovery of the vessel and arrest of one individual. 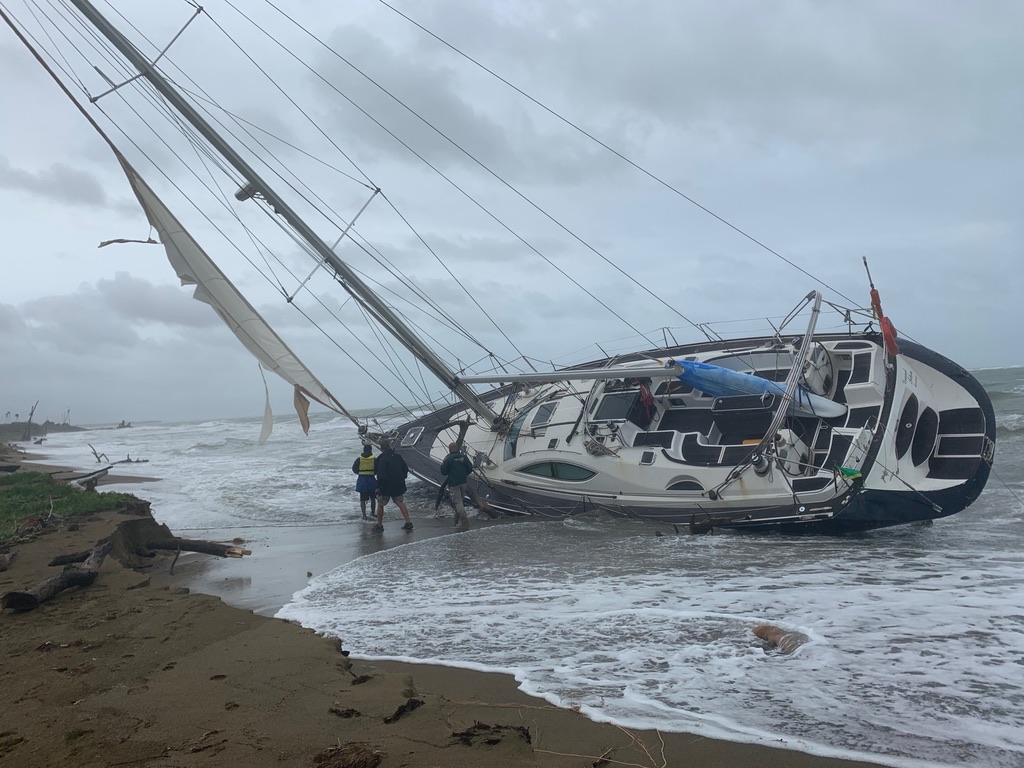 BOLO For SV Grand Filou reported stolen the night of July 23 to July 24th from Union Island, Clifton Harbor, Grenadines, in the Caribbean. SV Grand Filou is a 2004 54 foot DS Jeanneau, blue hull, flag Hamburg, and only has the jib rigged. This vessel was observed under sail on Monday July 27, 2020 on a NNW course, west of Guadaloupe and 50 miles north of Isla de Aves. The vessel was under jib sail alone as the main is not functional.

The vessel should not be approached. Please be on the lookout for this boat and report any sightings to THE USCG RCC SAN JUAN AT TELEPHONE NUMBER 787-729-2042 OR USCG RCC MIAMI AT 305-415-6800 and Glenn@boatwatch.org. Below is a photo of the stolen boat underway off Isla de Aves. 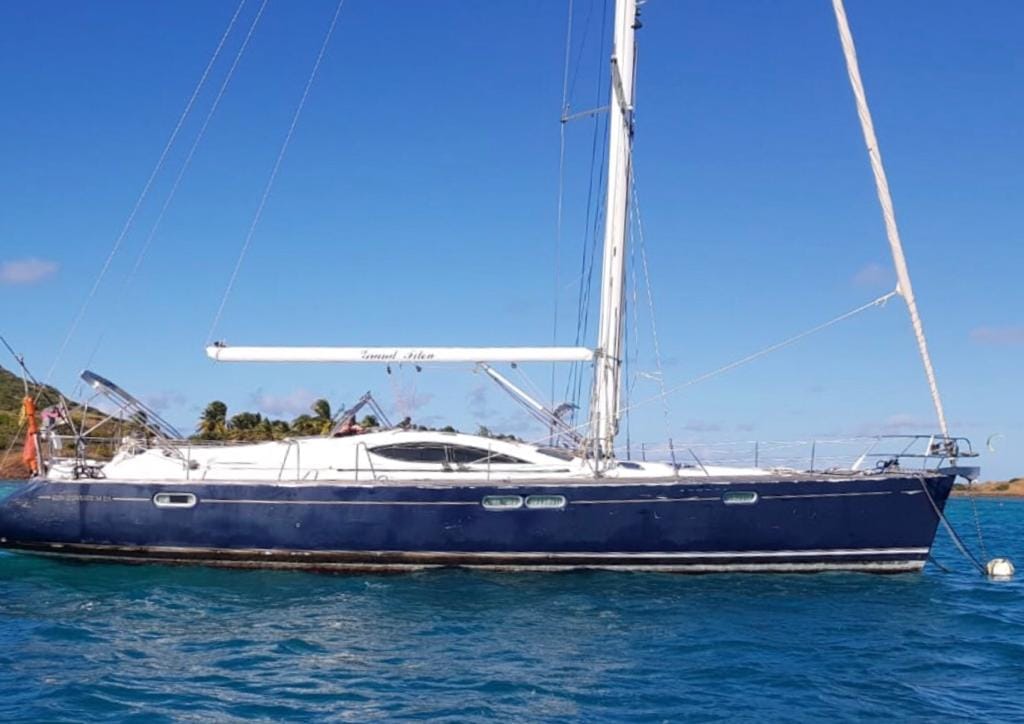 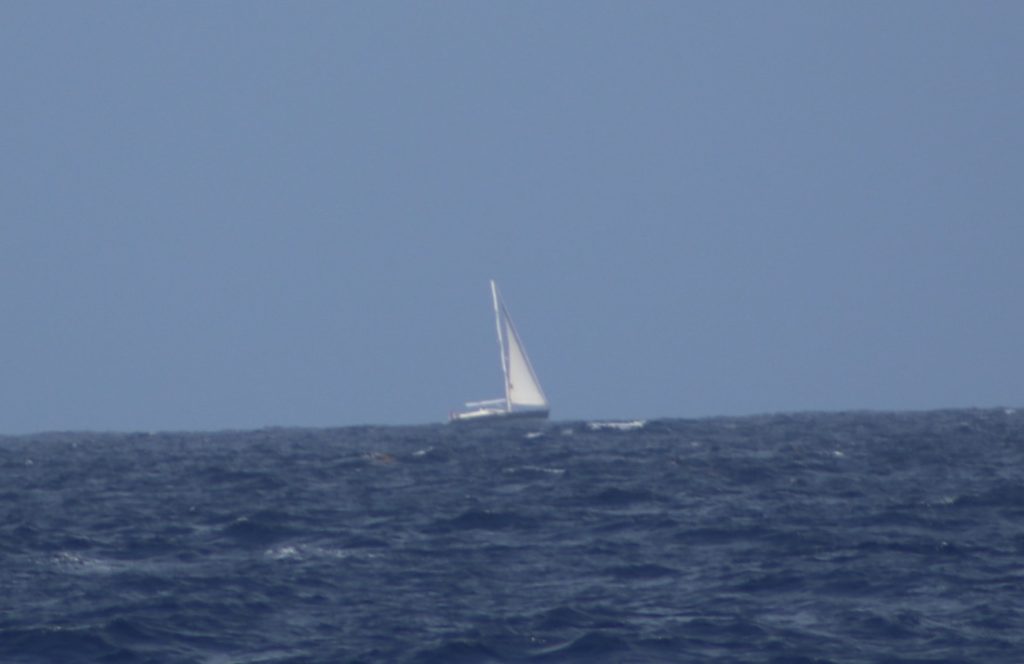 ON MONDAY, 27 JULY 2020, THE S/V GRAND FILOU WAS OBSERVED UNDER SAIL APPROXIMATELY 50 NM NORTH OF ISLA AVES. ISLA AVES IS WEST OF GUADELOUPE IN POSITION 15 40 N / 063 36 W. THE VESSEL WAS ON A NNW COURSE UNDER JIB ALONE AS THE MAIN SAIL IS NOT FUNCTIONAL. THE OWNER OF THE VESSEL BELIEVES THE VESSEL MAY BE ABLE TO MAKE AT LEAST 5 KNOTS UNDER JIB ALONE. THE VESSEL APPEARS TO BE HEADED TOWARDS THE BRITISH OR US VIRGIN ISLANDS OR PUERTO RICO.

THERE IS REASON TO SUSPECT THE VESSEL MAY BE INVOLVED IN EITHER DRUG TRAFFICKING OR HUMAN TRAFFICKING, AND SHOULD NOT BE APPROACHED. IF OBSERVED, CONTACT THE USCG RCC SAN JUAN AT TELEPHONE NUMBER 787-729-2041 OR USCG RCC MIAMI AT 305-415-6800. BELOW IS A PHOTO OF THE VESSEL UNDERWAY. IT HAS BEEN POSITIVELY CONFIRMED TO BE THE STOLEN VESSEL S/V GRAND FILOU. YOU MAY ALSO CONTACT GLENN@BOATWATCH.ORG IF YOU WISH TO REMAIN ANONYMOUS.

The above described sailing vessel was tied to a mooring in Clifton Harbor for the past six years.  The vessel is owned by JUERGUS ENNING, a German citizen living in Union Island.  The owner and his friend were on the boat on 22 JULY 2020.  The vessel is registered in Hamburg, Germany.  On 23 JULY 2020, people noticed the vessel had been re-tied to the mooring buoy by its stern instead of by the bow.  The next morning at 0600 hrs. local time, 24 JULY 2020, the vessel was gone.

The vessel is a weathered blue hull in color.  There are two large white spots on the port side hull.  The furling mainsail is stowed below decks when it was stolen, so the jib was the only sail available.  The engine had water in the fuel and was not working at the time it was stolen.  But that fuel problem can be easily repaired with new fuel filters and bleeding the engine.  The mast is white in color and has a radar dome.  There is only the frame for the Bimini up at the time it was stolen. There is damage to the bow pulpit due to a past collision.

At the time the boat was stolen, there was no 12-volt electricity as they had been removing and replacing batteries.  Therefore, there were no navigation, interior or other lights working, no radio, radar, AIS, etc. working.

The vessel was spotted by a person in Frigate Bay, Union Island, (time and date unknown), near Chatham Bay, which is on the West side of Union Island, and the vessel was headed North or Northwest.  Due to the approaching storm, the person was surprised to see the boat headed North and West.  The vessel appeared to have been coming from a NE Carriacou anchorage.

The vessel has been for sale, and within the past 4 to 6 months visited by two separate couples interested in buying it.  One couple, a man any woman, were from Denmark, and made a lowball offer. This couple from Denmark wanted to sail the boat to Bonaire, Colombia, Panama, through the Panama Canal, to Las Perlas Islands, and up to Costa Rica. The other two people were Frenchmen who were also interested in buying the boat.

Marius James placed the following report on a FB Group:

“In the night yesterday, from the 23 to the 24, our ship was stolen from its mooring.

Special features : the colour was weathered,

on the port side two big white spots,

Done by shafting on the Dock,

The boat has no bimini right now and no Srayhood.

Important : No furling mainsail rigged and not possible being rigged now!

Only the furling jib was rigged.”