Wind and Seas Sink Ship Off Coast of Colon Panama

District of Santa Isabel on the Costa Arriba of Colon 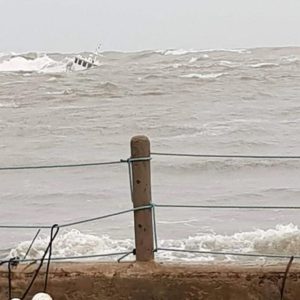 After several hours of being stranded on the beach reef in the community of Viento Frio, the Lakota ship sunk sunk this Monday in this sector of the district of Santa Isabel on the Costa Arriba of Colon.

It was known that the boat dragged its anchor before the force of the high winds and waves, when it was undergoing maintenance and luckily there were no crew at the time that is adrift.

An attempt was made to recover the ship by the owner, Open Blue Sea Farm Panama SA, but it was unsuccessful due to the bad weather that has prevailed on the beaches of the Panamanian Caribbean since Saturday.

The above information courtesy of: www.midiario.com