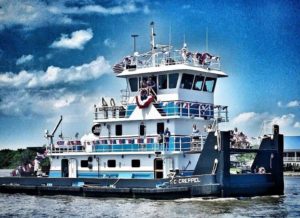 NEW ORLEANS — The Coast Guard and local agencies are responding to a report of two towing vessels that collided on the Mississippi River at mile marker 123, near Luling, Louisiana, Sunday.

The Coast Guard launched a 29-foot Response Boat-Small boat crew from Coast Guard Sector New Orleans and an MH-65 Dolphin rescue helicopter air crew from Air Station New Orleans. One of the people in the water was recovered from a Good Samaritan. The search for the other three is ongoing.

The RC Creppel was pushing two barges carrying sulfuric acid. One of these barges was damaged in the incident and reportedly released an unknown amount of vapor into the air. The source of the release is secured. A safety zone from mile marker 121 to 123 has been issued and traffic is closed to vessels in that area.

“This is a complex response that has a search-and-rescue component, as well as a pollution component that will require planning and coordination to execute,” said Capt. Kristi Luttrell, the Commanding Officer of Sector New Orleans. “We are working alongside our partners at the state and local levels to quickly assess the situation so that we can safely make every effort to find the missing mariners and minimize any further impact to the environment.”

Center of Toxicology and Environmental Health has been contracted for air monitoring.

The cause of the incident is under investigation.

Involved in the response are: