By Cole Waterman | Cole_Waterman@mlive.com
Saginaw and Bay City News
ESSEXVILLE, MI — Five people and a dog were rescued by U.S. Coast Guard personnel as their boat sank in Saginaw Bay.

About 11:30 a.m. on Wednesday, July 1, the Coast Guard Station Saginaw River in Essexville was notified by Bay County Central Dispatch that a 52-foot Chris-Craft boat was sinking about a mile and a half northwest of Spark Plug Light. Dispatch had been called by the owner of the boat.

The Coast Guard deployed a 45-foot response boat. As it was on its way, another person aboard the Christ-Craft called the Coast Guard directly, said BM2 Adam Voigt.

“When we arrived on scene, there was already (a woman) in the water getting smashed against the boat from the waves,” Voigt said. “When we got there, we quickly realized there was no saving the boat and we had to get (the woman) out of the water and the rest of the people off of the boat before it went down.” 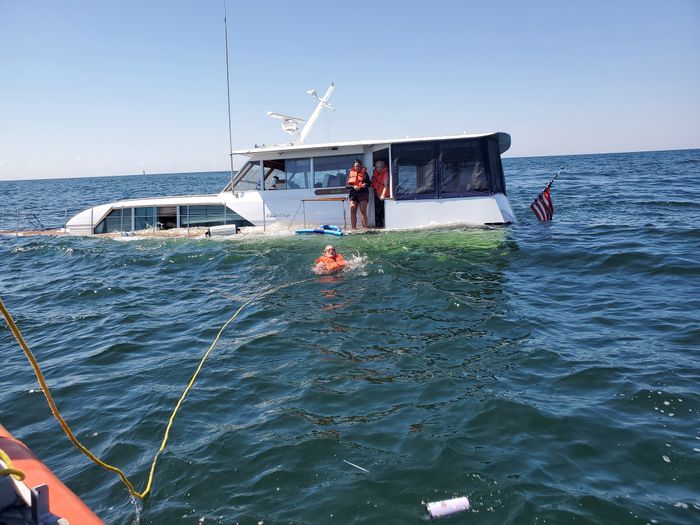 Coast Guard personnel rescued the woman from the water, as well as four others who had managed to stay on the Chris-Craft. They also saved a German shepherd dog, Voigt said.

“A lot of them were in shock,” Voigt said. “They were very nervous. It was difficult to get them to calm down and help themselves. One individual was in and out of consciousness.”

Coast Guard personnel brought the five people back to shore and they did not request medical attention, he said.

What caused the boat to take on water remains undetermined. “The owner said the water was coming in from the bow in the lower decks,” Voigt said. “The bow started getting lower and lower in the water before they noticed.” The boat is currently resting in about 30 feet of water, listing on its starboard side. Only a foot or two of it remains showing above the waterline, Voight said.