Note From Boatwatch: Please buy an EPIRB, and or a PLB,  and register it properly.

The Coast Guard recommends mariners have an emergency position indication radio beacon or a personal locator beacon on board their vessel at all time, which gives responders exact, updated locations after activation. 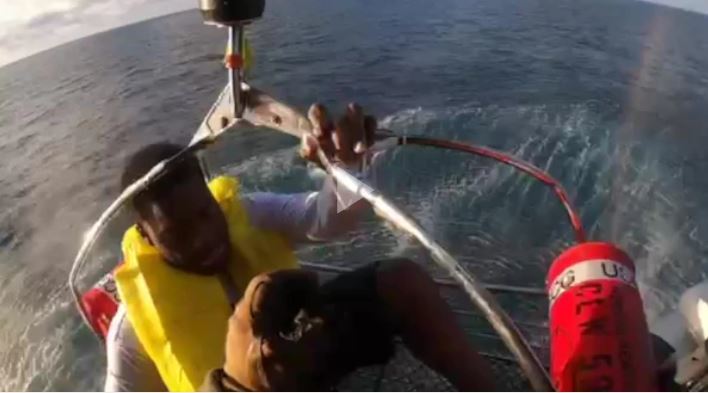 Editor’s Note: Click on the image to download video of hoist. Video of crew interviews are available as well.

ST. PETERSBURG, Fla. — The Coast Guard rescued four people, Friday, who spent the night clinging to a boat that capsized in a heavy storm, 30 miles west of Cedar Key.

A Jayhawk aircrew located the survivors at about 7:30 a.m., which was 12 hours after the initial distress call, all wearing life jackets.

Sector St. Petersburg watchstanders received an urgent radio call at 7:12 p.m., Thursday, from the 20-foot vessel crew reporting their vessel was taking on water. After the distress call, the watchstanders lost contact with the boaters, as a heavy thunderstorm moved through the area.

A Jayhawk aircrew spotted debris in the water Friday morning, and then shortly after found the capsized vessel with the four mariners on the hull.

“We don’t get that many perfect, feel-good stories with search and rescue cases, but when we do, we enjoy it,” said Lt. Cmdr. George Menze, Jayhawk pilot during the case. “The successful outcome is due to the dedicated and highly trained crews, and that the mariners used a marine radio, relayed their position, wore life jackets, and stayed together with the vessel.”

The Coast Guard recommends mariners have an emergency position indication radio beacon or a personal locator beacon on board their vessel at all time, which gives responders exact, updated locations after activation.

Weather at the time of the incident was winds gusting to 35 mph with 4-foot seas.