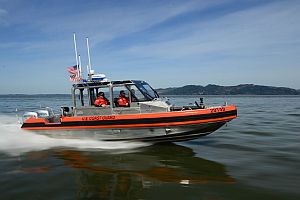 The man was rescued wearing a life jacket in 46-degree water.

Watchstanders at Coast Guard Sector North Carolina received the initial report from the father-in-law of a man whose 18-foot boat sunk at the mouth of Alligator River, near East Lake. At the time of the call, the man was on the bow of his sunken vessel.

No injuries were reported. The man was treated for hypothermia.

“This is one of those situations that could have deteriorated quickly,” said Senior Chief Greg Slusher, Command Duty Officer. “No one leaves the marina expecting their boat to sink. Thankfully this man equipped himself with a lifejacket and a way to call for help. Being unprepared in water this cold can turn a dangerous situation to a deadly one very quickly.”