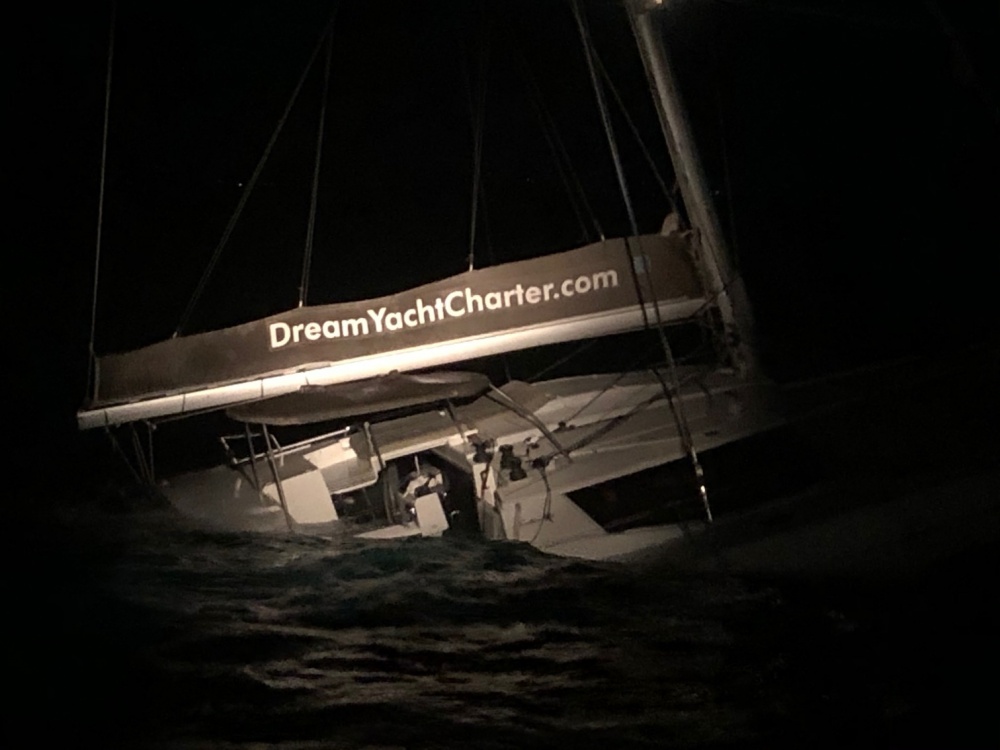 SAN JUAN, Puerto Rico — Coast Guard air and surface crews and the crew of the passenger ferry Kydon combined efforts to rescue two boaters from a sinking catamaran Friday night, approximately 10 nautical miles north of Manati, Puerto Rico.
Rescued are a man, French national, and a woman, U.S. citizen, who reportedly were the only persons aboard the 36-foot catamaran, Blue Cocktail, as it was traveling from the Dominican Republic to the British Virgin Islands.
Watchstanders at Sector San Juan received at 7:24 p.m. Friday a mayday radio call from the Blue Cocktail, on VHF Channel 16, reporting the vessel was taking on water and rapidly sinking.
Watchstanders diverted an Air Station Miami HC-144 Ocean Sentry aircraft, directed the launch of an Air Station Borinquen MH-65 Dolphin helicopter and dispatched a Boat Station San Juan 45-foot Response Boat Medium to search for the boaters and any signs of the Blue Cocktail.

Watchstanders also issued an Urgent Marine Information Broadcast UMIB to alert marine traffic in the area. The ocean ferry Kydon received the UMIB and diverted to the area of the distress.

Shortly after the initial distress call, the woman jumped on the dinghy which started drifting away from the catamaran, while the man stayed onboard attempting to control the flooding. The man was forced to abandon the vessel as it started to sink and became partially submerged.
Upon arriving on scene, the crew of the HC-144 Ocean Sentry aircraft located the man in the water and the woman safely aboard the dinghy. The Coast Guard helicopter arrived on scene shortly thereafter and the aircrew vectored-in the Coast Guard response boat to the survivors’ position.
“This was a great case,” said Petty Officer 2nd Class Mason Ormsby, Boat Station San Juan response boat coxswain for the rescue. “We were able to work well with on-scene aircraft and with the Captain and crew of the motor vessel Kydon, who gave us a good reference to where to start looking for the submerged vessel. This was a valuable experience for myself and crew to use the skills we’ve been taught in training. Being able to rescue the survivors made it that much more rewarding.”

“This rescue highlights the importance of boaters being equipped with VHF Marine radios ” said Cmdr. Beau Powers, Coast Guard Search and Rescue Mission coordinator for the case. “Mariners cannot be certain that a cellular tower is close enough to receive a cell phone call. In addition to the Coast Guard hearing you on radio on channel 16, local agencies and other mariners will hear you call for help. The mariners in this case were doubly prepared with life jackets which they donned when directed by the Coast Guard. Be prepared when recreating on the water, there is no room for errors at sea.”

Following the rescue, the survivors were transported to San Juan and transferred to Customs and Border Protection personnel with no medical concerns.
Channel 16 VHF (156.8 MHz) is the marine international distress, safety and calling channel. Ships required to carry radio, USCG, and most coast stations maintain a listening watch on this channel.