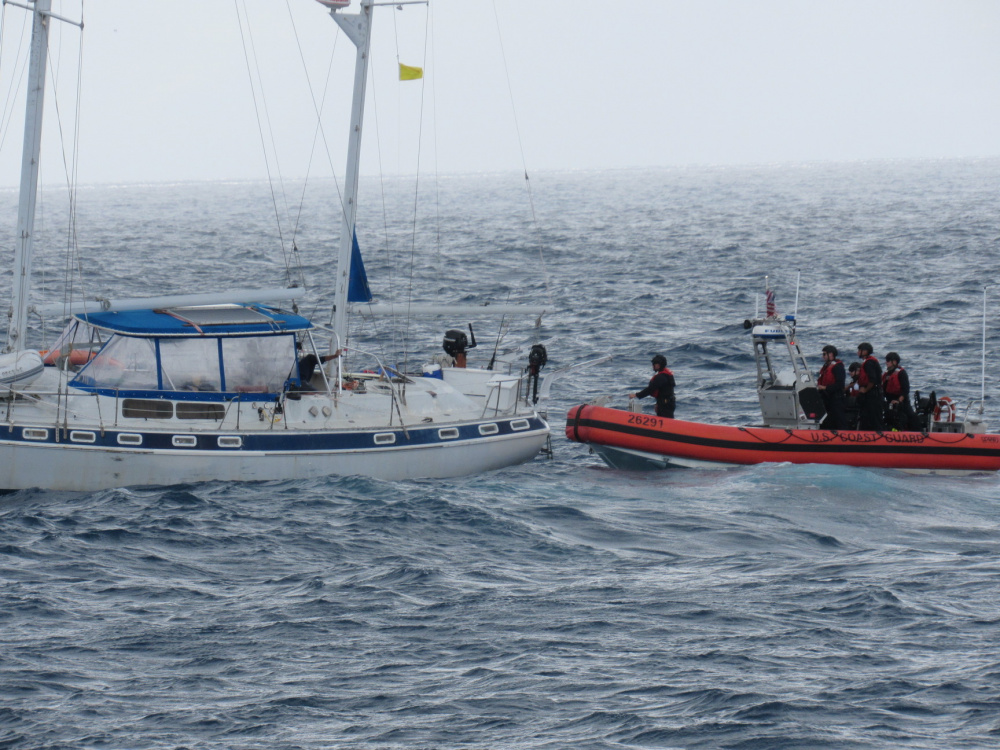 The sailing vessel Wahu was transiting from Florida to Barbados with two men aboard, a U.S. and an Austrian citizen, when it reportedly became disabled.

Coast Guard watchstanders in Sector San Juan received a communication from Tow Boat U.S reporting the sailing vessel Wahu with two people aboard was disabled and anchored, approximately nine nautical miles west of Cabo Rojo.  The report also stated the sailing vessel became disabled due to bad fuel, no propulsion and having ripped sails. Watchstanders were able to establish communication with the operator of Wahu, who also informed the vessel had a dinghy onboard with a hole in it and that they were working to repair it and use it to get to shore.

Watchstanders diverted the Coast Guard Cutter Heriberto Hernandez to the scene to render assistance.  Once on scene, the cutter’s Over the Horizon IV boat came alongside, and the crew provided the Wahu with 15 gallons of diesel fuel and they ensured the sailing vessel’s propulsion was working properly.  The cutter Heriberto Hernandez escorted the Wahu to the Puerto Real Marina in Cabo Rojo, where the cutter’s boat crew completed a post search and rescue boarding of the vessel Wahu, which revealed multiple safety violations.  The cited violations included the vessel Wahu not having any fire fighting equipment, not having a Type 4 Life Ring buoy throwable personal flotation device, not having a pollution placard and not having a copy of the navigation rules onboard.

“Our goal is not to terminate the voyages of the boating public,” said Lt. Andrew Russo, Coast Guard Cutter Heriberto Hernandez commanding officer. “However, safety of life at sea is our number one priority, and these men set out on a dangerous trip across the Atlantic and Caribbean without proper firefighting or safety equipment to respond to an at-sea emergency. Fortunately, in this instance we were able to assist the mariners to safety without damage to property or serious injury.”

Once the operator of the sailing vessel Wahu completes repairs and takes corrective actions on the cited safety violations, the vessel will be able to resume its voyage.