An Air Station Savannah MH-65 Dolphin helicopter launched and a rescue swimmer, with a dewatering pump, was lowered the catamaran, which was flooding at the time. The catamaran then capsized due to hull damage from running aground. 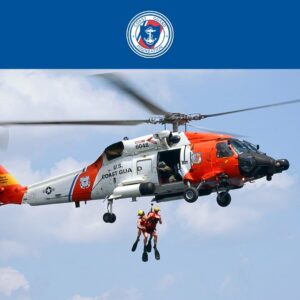 The Dolphin aircrew hoisted the four people to the aircraft safely, and a Coast Guard Station Tybee 45-foot Response Boat-Medium crew arrived on scene and pulled the rescue swimmer from the water.

All people were taken to Hunter Army Airfield. No medical concerns were reported.

Coast Guard Sector Charleston watchstanders received a mayday call on Channel 16 at 7:30 p.m., from a catamaran crew member stating they were in distress.