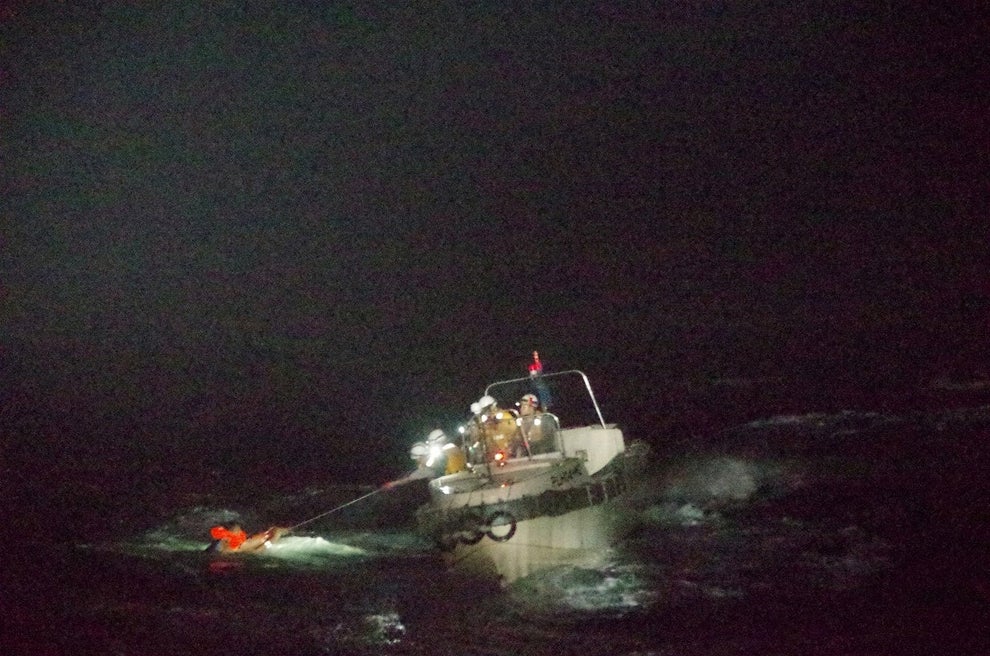 Fears 42 crew and 6,000 cattle drowned after ship sinks in typhoon off Japan

A major search operation has been launched off the coast of Japan after a ship carrying nearly 6,000 cattle and 43 crew members capsized in stormy weather.

The cargo vessel sent out a distress call late on Wednesday as it was caught up in Typhoon Maysak, a storm that has been lashing Japan and the Korean peninsula.

Japan’s coastguard said it had found one member of the crew in the East China Sea, bobbing in the ocean wearing a life vest and waving to a naval surveillance aircraft. Dramatic images provided by the coastguard showed a person in a lifejacket being hauled from choppy seas in darkness.

The 45-year-old Filipino chief officer, Sareno Edvarodo, told his rescuers the ship lost an engine before it was hit by a wave and capsized.

He said crew members were ordered to put on lifejackets as the ship capsized, and that he jumped in the water before watching it sink. He said he did not see any other surviving crew members before he was rescued.

Of the 42 missing crew members, 38 are from the Philippines, two from New Zealand and two from Australia, the coastguard said.

The vessel, named Gulf Livestock 1, was transporting 5,867 cattle from Napier in New Zealand to the port of Tangshan on China’s eastern coast. Owned by Gulf Navigation Holding, a UAE-based company, it departed Napier on 14 August.
Japan’s coastguard said three vessels, five aircraft and two divers had been deployed in the ongoing search, which was taking place on Thursday in good weather after the typhoon completed its passage through the area.

The incident has put a spotlight on the practices of the live cattle export industry, with New Zealand authorities saying they have put a temporary suspension on all permit applications in light of the ship’s sinking.

Last year the country launched a review of its live export trade, worth an estimated NZ$54m (£27.4m) in 2019, after thousands of animals being exported from New Zealand and Australia died in transit.

The New Zealand animal rights organisation Safe said the incident demonstrated the risks involved in the trade, to both humans and animals.

“These cows should never have been at sea,” campaigns manager Marianne Macdonald told the Reuters news agency.

“This is a real crisis, and our thoughts are with the families of the 43 crew who are missing with the ship. But questions remain, including why this trade is allowed to continue.”