In 2010, we were on a passage from Isla Mujares, Mexico to Key West, Florida, when we spotted something orange ahead. At first our hearts pounded at the thought of a life raft. With binoculars we confirmed it was an overturned 16’ Hobie Catamaran with no one aboard. In a couple hours it would be dark and a hazard to navigation. This is our photo of the catamaran. 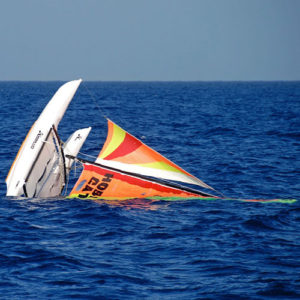 We first reported the find on the SSB HF radio through the Maritime Mobile Service Net and asked they report it to the USCG. To simplify matters, we then spoke directly with the USCG on our Sat phone. Our concern was the possibility of a missing boater from this catamaran.

The USCG asked us all the questions one would expect, like were there any other items floating in the area, the location of the Hobie Cat, if there was a name on the vessel, personal items, and the  presence of marine growth.  The more we discussed the situation with the USCG, the more apparent it became the Hobie Cat recently floated away from a beach resort, either in Mexico, or Cuba.  The USCG told us it would be a hazard to navigation, and if we wanted it, it was ours under maritime salvage rights.  Since the seas were calm, we towed it overnight and back to Key West.  The serial number indicated it was produced and sold in Europe, and the chance of locating its owner extremely slim.

Our only other significant scare was the alert of a floating shipping container. This occurred on a night passage between Los Roques, Venezuela and Puerto La Cruz, Venezuela. We received the warning and position of the container via SSB HF radio from another cruiser who had spotted only the corner of the huge container sticking up above the water. The word of this danger spread throughout the cruising community via SSB as boats on passage plotted the wind and drift. Everyone at sea changed course miles from this hazard.  Luckily no one saw it again.