JRCC Australia advised and confirmed tonight that that “the imagery you have sent corresponds to a 14 metre Bavaria which was lost at sea off the coast of Nambucca Heads, NSW (30-36.4S 153-04.1E) in March 2021. Six persons were rescued and a number of them required hospitalisation.”

JRCC advised to pass our thanks to Boat Watch members and allay any concerns they may have held.

JRCC appreciates your good work and the notification to JRCC.

Six people have been rescued by emergency services in the middle of the night after their yacht began to sink off Nambucca Heads on the New South Wales Mid North Coast.

The group was travelling to the Gold Coast on Wednesday and were six nautical miles off Nambucca Heads when the 47-foot yacht lost its steering and began taking on water.

Coffs Harbour Marine Rescue unit commander Graham King said they received a call for urgent help at about 1:00am.

“We talked with the Water Police and they asked if we could go and assist this vessel, so we got to sea,” Mr King said.

“Our blokes were in the dark, in the wet and horrible conditions, and were able to get a rope to the skipper. But we were unable to tow it.

Mr King said the boat’s rudder, which is used to steer, was jammed, resulting in the boat turning onto its side.

“We asked for the assistance of Water Police and they came down with a bigger vessel but it didn’t go very far because they had the same trouble,” he said.

“The yacht started taking on more water through the back end and the decision was made to take the six people, and the yacht was abandoned.”

Mr King said that conditions were quite rough and the group could have been in a difficult situation if emergency services had not attended to assist.

“The crew couldn’t make any progress at all with the yacht, which meant that they at the whim of the tide and the wind which was pretty uncomfortable throughout the night,” he said.

“Eventually they would have been blown onto the shore, but our boat was down there before that could happen.”

Mr King said it was a sad end to a beautiful vessel and other boaters were being warned of the sunken hazard.

“It’s unusual for boats like this to sink. Most of the time we are able to affect the rescue and tow the vessel into port,” he said.

“They were about 22 nautical miles south of Coffs Harbour, so it would have been a really long night towing a vessel of that size back. But we weren’t able to do it because of the situation.

“There’s a general warning to other boaters because bits of this boat could be just below the surface and become a real navigation hazard.”

The Marine Rescue Coffs Harbour radio base is broadcasting warnings to alert other boaters in the area to the potential navigational hazard posed by the sinking boat. 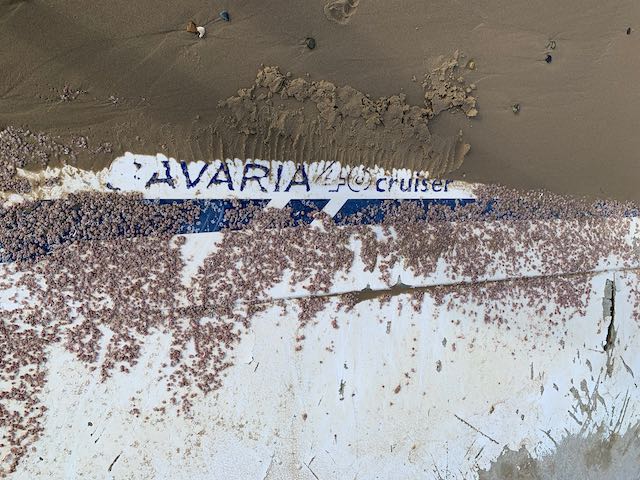 On January 9, 2022, a  member of Boat Watch reported finding the debris of what possibly maybe a Bavaria 46 sailboat on Corindi Beach, Australia. Anyone with information concerning this sailboat please report to Boat Watch Eddie@boatwatch.org or your nearest Coast Guard authorities. 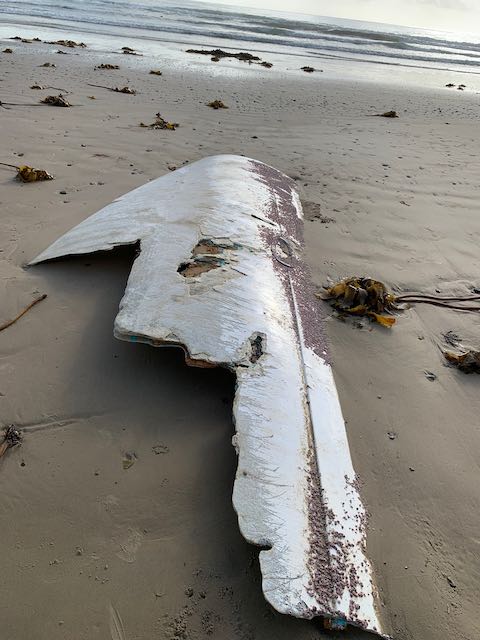 From Wikipedia
Corindi Beach, pronounced Cor-in-“dye” although Cor-in-“dee” is widely used recently, historically also known as Pipeclay Beach until a name change in 1954,[2][3] Corinda until a forced change to be provided postal service to avoid confusion[4] or by Red Bank[5] as Corindi River was formerly known, is a beach and small seaside farming town located on the Mid North Coast of New South Wales, Australia. The village is situated 33 kilometres (21 mi) north of Coffs Harbour and 50 kilometres (31 mi) south of Grafton. The original village of Corindi is slightly north along the Pacific Highway at Post Office Lane and Casson Close. Corindi means “grey” in local indigenous language referring to the pipeclay on the beach.[6]
Corindi is surrounded by the Tasman Sea to the east and the Pacific Highway to the west. The 30° south latitude line runs just north of Corindi Beach.
At the 2016 census, Corindi Beach had a population of 1686.[1] It is the site of the Yarrawarra Aboriginal Cultural Centre which provides information on the Gumbayngirr Aboriginal people’s history and customs.[7][8] Corindi and surrounds has become a major blueberry producer, with many locals and tourists working during the peak seasons picking fruit.